Who could have imagined that one day I would swim alongside the largest fish in the world: Whale sharks, creatures that can weigh up to 34 tons and are up to 20 meters long.

It was in Oslob, in the far southeast of Cebu Island in the Philippines that the dream came true. I embark on a fishing boat and rush into the salty waters.

The guide had forbidden me once in the water, to touch the whale sharks or to get too close to them. But despite this, do not fear the adventure! These whale sharks are mammals that fortunately remain harmless. 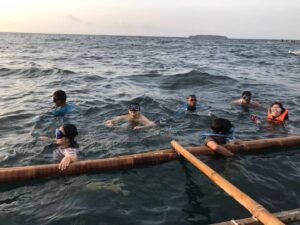 Go for it and hire a Go-Pro to remember the most adventurous swim of your life. Everyone will be amazed to see your photo taken with a giant creature in the middle of the ocean. Some won’t even believe you’re still alive.

Honestly, there are few places that offer you the privilege of experiencing an incredible moment, of immersing yourself in the universe of the giants of the seas. I only selected two sites in the Philippines: Donsol (Luzon) and Oslob (Cebu). 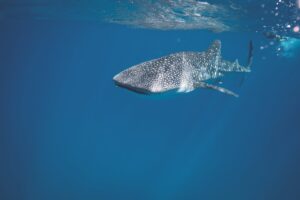 I will only speak about Donsol briefly because I preferred to go to the Oslob site instead.

In Donsol, according to my research, you can observe whale sharks in their natural environment in the open sea. But that does not mean that you will necessarily see them. On the other hand, if you meet them, legally, you will only have the right to 5 minutes of interaction with them, because indeed, the WWF (Word Wide Fund for Nature) which is a world organization for the protection of the nature obliges him. This is part of its vocation to protect the environment …

Often, according to reports, these rules are not followed too much. But, to please tourists, the boats rush towards the sharks once they are located. They then throw the tourists into the water so that they have time to see them. Note that March and April are the best months to see whale sharks.

Here, however, there is too much to tell.

The story of whale sharks in Oslob

In the past, the small fishermen of the village of Oslob weren’t too fond of whale sharks. The latter damaged their fishing nets and caused the fish to flee.

Since the flesh and fins of whale sharks are highly prized in Asia and especially in China, some fishermen hunted these whale sharks for commercial purposes. Others feed them shrimp so as to push them further away from their fishing grounds. Then, the fishermen found that the whale sharks came back to the same place to get their shrimp.

“In the small town of Tan-Awan near Oslob not far from the shore, I saw whale sharks feeding on shrimp,” tourists said.

Recent Posts
Categories
Manage Cookie Consent
To provide the best experiences, we use technologies like cookies to store and/or access device information. Consenting to these technologies will allow us to process data such as browsing behavior or unique IDs on this site. Not consenting or withdrawing consent, may adversely affect certain features and functions.
Manage options Manage services Manage vendors Read more about these purposes
View preferences
{title} {title} {title}