Fez is one of the oldest imperial cities in Morocco. It includes the old Fès (Fès El Bali), the New Fès (Fès El Jdid of the thirteenth century) and the New town of the twentieth century, recently built by the French.

Visiting Fez, known as the spiritual capital of Morocco, is a magical flashback of ten years in the past. In Fes El Bali (Old Fez), you just have to go through the “Sesame” gate, called the ABILJENOUD gate. 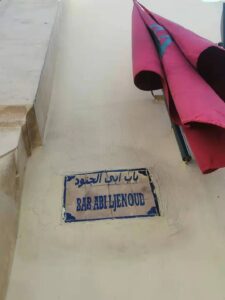 Then you will enter this rare, ancient and ancestral world. A world which, despite everything, has remained almost intact over time. Old Fez is in reality an unusual labyrinth of 9,400 alleys and 8,000 walls of ancient carved stones. 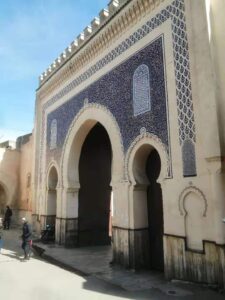 This article offers a short guide to visiting the city of Fez, and above all, to answer your questions WHAT to do, see and eat.

GOOD TO KNOW ABOUT FES

A PRECISE AND CONSISE GUIDE TO VISITING FES

Below is a quick guide to seeing it all in Fez in two days.

Morocco is just a few steps from southern Europe. A short flight from most European cities and you are already there. However, culturally it is a whole different world.

Moroccan culture is extremely friendly and hospitable. Sometimes you will be invited for mint tea. It is a cultural ritual and a symbol of Moroccan hospitality. It is often considered rude to say NO. You just take the offer.

Basically, Morocco is a safe country but it is advisable to go unnoticed in terms of clothing, especially for women. It is important to dress respectfully and conservatively.

No mandatory vaccine is required upon entry to Morocco, but it is recommended that travelers always be up to date with vaccines against hepatitis A and B, rabies, typhoid, and Covid19.

Almost all countries in Europe and the English-speaking countries of the world are exempt from the entry visa to Morocco. Depending on the issuing country, visitors can stay up to 90 days.

In the Moroccan constitution, Arabic and Berber are the official languages of the country. French is also commonly spoken well by some. English is not widely spoken, but is emerging, especially in large cities. It would be greatly appreciated to speak the Moroccan dialect: the Arabic language with Moroccan colors.

So learn this vocabulary!

Fez is accessible by direct flight from several European cities.

By plane: The main airport, Fès – Saïss, is 15 km south of the city. Bus # 16 is available at the airport. Rental cars are also available for hire at the arrivals terminal. I advise you to travel by Taxi because it is easier and more convenient. You can also rent a car if you have driven in Morocco or a similar country before. Driving for the first time in Morocco is not easy. It will take time for you to adjust.

By train: the city of Fez is directly accessible by train from several Moroccan cities. You can check the availability and timetables of the rail network on the website www.oncf.ma. The train journey between Casablanca and Fez lasts 4 hours. Between Marrakech and Fez, it lasts 7 and a half hours …

Once in Fez you will need to know where to go and of course how to get there.

Fez includes the largest “urban car-free” circuit in the world. This means that inside the Medina (the old town), the streets are so narrow or sometimes even dead ends that cars do not pass. Therefore, the best way, if not the only way to get around is on foot. You will be confused in such a maze, but be patient. Getting lost is part of the charm of the old town. But be careful though, often when asking anyone for directions, they’ll expect a tip and won’t hesitate to guide you along the way. My best advice would be to hire a licensed guide to take you straight to the essential attractions. 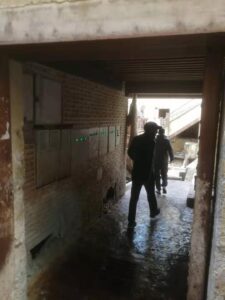 First of all, walking around the souks of Fes El Bali – the old medina – is a must do. Here you will find winding alleys and beautiful traditional doors adorned with copper. As you walk through the old Medina, you will find: 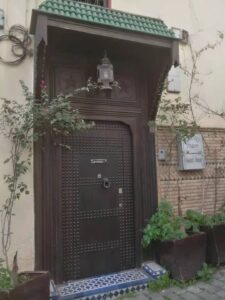 The old town of Fez is the basis of all the particularity of the city.

1. The University of al-Qarawiyyin

The University of al-Qarawiyyin, the oldest university in the world and which attributes to Fez the status of capital of knowledge. It was founded in 859 AD and remains a sacred and spiritual place to this day.

Even though entry is closed to non-Muslims, do not hesitate to explore its exteriors and the details that adorn its large walls. Inside, there are 270 columns and 24 doors that surround the inner courtyard.

It is the oldest Koranic school in the world. The Medersa Attarine is an Islamic school which was founded in the 13th century. It is one of the few religious buildings in the city that non-Muslims can enter. The interior calligraphy, mosaic and marquetry of this building will impress you.

Indeed, in Fez, there are several prestigious Koranic schools, in this case the Medersa Bou Inania and the Medersa Seffarine. They are almost all similar. In my opinion, visiting one of them was enough. 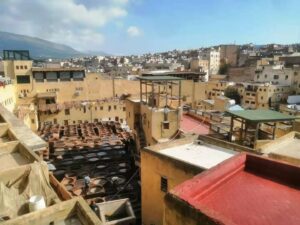 Continue your walk to the leather tanners district. If you are not accompanied by a tour guide, false guides in the alleys will spot you, especially if you seem to be lost. If you follow them unopposed, that would mean you’ve already hired them as guides. The people are generally nice. Do not be suspicious if too much. In case they guide you, they will only ask for a small tip.

But be aware that in the tanners’ district, we produce leather. As a result, there is an incredibly bad smell that manifests itself from the treatment of animal skins. In fact, if you are a Nose, it is your sense of smell that will guide you to the leather dye pits …

Don’t hesitate to visit the carpet store where you will probably be invited for a mint tea. They will also show you beautiful rugs for sale.

Finally, I have greatly appreciated the difficult profession of these traditional leather tanners. The products offered for sale are inexpensive but you have to compare and negotiate the prices very well.

From tradition to modernity, even from old Fez to new. Finally the possibility of getting around by car!

Here you can drive or take a taxi. In Fes El Jedid, you can visit the royal palace. Although closed to the public, this does not prevent you from admiring the seven outer gates of the palace. But, don’t take pictures of the guards.

Then you can take a taxi or drive to Borj Nord to enjoy the beautiful panoramic view of the city. 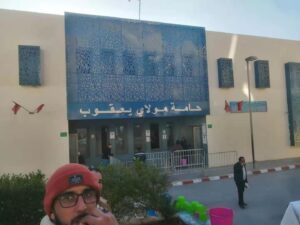 Moulay Yacoub is a town located in the hills less than 30 km north-west of Fez. It is a hot spring overflowing with thermal water rich in sulfur, sodium and calcium. This water clearly improves psoriatic skin. It cleanses dander and contains anti-inflammatory properties.

I have included this destination in this article because it would be really wonderful if you go there. The last decade has seen the emergence of a luxury hotel that has taken root here.

WHAT TO EAT AND DRINK

Moroccan culinary culture stems from a mixture of Euro-Mediterranean, Arab and Berber cuisine. Spices are an important part, as are dates, mint, olives, almonds, olive oil and argan oil.

Couscous (tiny granules of durum wheat) is a typical Moroccan dish. It is often offered on the Menu only on Fridays as it is customary to eat it on Fridays.

The Tajine is also a Moroccan dish par excellence. It is a slow cooked stew made with vegetables and meats.

Obviously, mint tea is a tradition. Usually, we put sugar in it. If this bothers you, be sure to ask for the separate sugar and then add more as you like.

I recommend eating the Bissara (broken weight mash) for breakfast. We put olive oil in it and is served with bread. 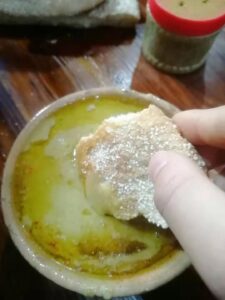 WHERE TO GO AFTER FES?

If you rent a car, you can drive to Volubilis, located an hour west of Fez. Formerly a Roman city. Today a beautifully preserved and well preserved archaeological site. A little further, and you are in the blue city, Eternal Chefchaouen… Going to Ifrane, the little Switzerland of Morocco would be splendid for some. In Ifrane, it is cold and it snows during the winter. 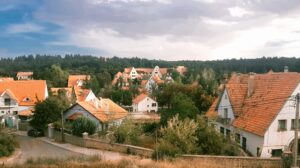